What to do and what NOT to do about gas prices

DO- Reduce fuel consumption. Walk or ride a bike to your destination when you can. Drive the smallest vehicle with the smallest engine that suits your needs. Join a car pool if you can.

DON'T- Don't pin your hopes on the federal or state government investigating price gouging. The government doesn't have to investigate what people report regularly. If a gas station were to try and charge $5 a gallon, people would rat that place out. Of course, the libertarian solution to price gouging is to not shop at any place that charges too much for gas. If the gas gauge is on "E" and the next gas station wants to charge higher than average, only buy enough to get to the next gas station.

DO- Build more power plants. There are still oil powered power plants in the US. This strikes me as an incredible waste when electricity can be generated so many other ways.

There is nothing that the government can do to increase the amount of oil that is being pumped out of the ground, nor is there anything that can be done to increase the amount of crude oil in the earth's crust. Now that India and China are rapidly becoming nations of cars instead of bicycles, the demand for oil is rapidly increasing with no increase in supply. I hate to say this, but you all are just going to have to deal with high gas prices.
Posted by Robert Enders at 2:40 PM 1 comment:

There are some services that should be consilidated. For instance, the 911 services of the city and the county should be merged to provide better services and save taxpayer money.

But a complete city county merger could draw thousands of Allen County residents into Fort Wayne against their will. No neighborhood should be annexed against the will of its residents, just as the United States should not be allowed to annex another country.

I will concede that it may be in the best interests of current Fort Wayne residents to expand this town from the Whitley County line to the Ohio Border. And it may benefit US citizen to expand the American Empire so that it stretches from the Yukon to the Yucatan. But it would be wrong.
Posted by Robert Enders at 8:36 PM No comments:

The state of Indiana paid $90,000 for the following slogan: "Re-start Your Engines". Why 30K a word? It seems that the money was spent on focus groups and consultants. (Sometimes I think a consultant is someone you pay to tell you to do what you planned on doing anyway.)

I would have done it for free. My guess is that most out of state tourists would still come from within the region, say the Midwest and Kentucky. How about "Indiana: Culture That's Close to You"

The problem with "Re-start Your Engines" is that it appeals mostly to racing fans. While there is nothing wrong with people who enjoy watching cars go real fast in a circle, my guess is that racing fans don't need a commercial to tell them that the Indianapolis 500 takes place in Indianapolis.
Posted by Robert Enders at 9:43 AM 1 comment:

Monday I was at the tax protest. There weren't as many latefilers this year as there were last year. I think part of that is due to confusion over when the actual deadline is, and part of it is due to more people filing online. One woman said that she liked paying taxes because of the services that she recieves. I propose that she be allowed to pay the portion of my taxes that do not go towards roads, emergency services, and the military.

There is an interesting idea for you all: tax earmarking. You already can check off that box on the 1040 that put $3 toward the Presidential Campaign Fund. I never check it off, because the money always goes to candidates that I don't support. But it would be an interesting thing to see how many people would vote for a program versus how many would be willing to pay for a program.

How many people want to pay for the "Bridge to Nowhere"? Fifty people? That bridge then would consist of large floating chunks of styrofoam. For the price that the government is paying for that bridge, every resident of Gravina Island could just buy a house some place warmer and more accessable. Alaska's Congressman Ted Stevens threatened to quit if the funding was cut for the bridge. I say we should have taken him up on the offer.

Yesterday I went out to distribute more door hangers. I took Mikey Potter with me, but he got tired after about an hour. I'm going out again today, but I have to be at the downtown library at 7pm. Why? To help film "Libertarians at Large".

Yes, "Libertarians at Large" will be on at 7pm tonight on Comcast Channel 57. I don't know what Doug has planned or who will be the guest. You can tune in, then call the show to ask or comment on the topic being discussed. Or you can flick rubber bands at the screen. Hey, it's your TV.
Posted by Robert Enders at 10:07 AM 1 comment:

As I write this, I am planning on going out to the tax protest to hand out pamphlets for my campaign for state representative. So I imagine that tonight there will be a few first time visitors to this blog.
So for all you new people, feel free to post a comment. You can introduce yourself, ask me a question, give a shoutout to your friends at home, or propose a topic for discussion. Say how much you love or hate paying taxes.
Posted by Robert Enders at 1:46 PM No comments:

It seems that this conservative president had a very liberal attitude towards immigration.
http://www.ontheissues.org/Celeb/Ronald_Reagan_Immigration.htm
Posted by Robert Enders at 9:09 AM No comments:

My campaign flyers are in! 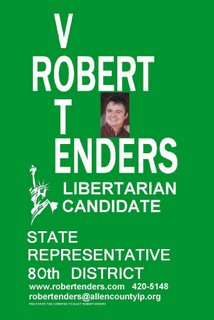 I know that the campaign really won't heat up until after the primary. But I ordered them early so that I could hand them out on tax day.

Yes, there is a campaign website, but it is under construction. Basically, right now it has a link to this blog and my email address. I'll let you all know when it's really up and running.
Posted by Robert Enders at 3:52 PM 1 comment:

This is a friendly reminder that our next Tax Protest will be on April 17th near the Clinton Street Post Office. It will start at 5pm and last either until Congress finally agrees to produce a pork-free federal budget and lower our taxes, or until we all get tired.

I'll be there campaigning in person. I'll probably take off around 9pm so I can take a nap before I go into work later that night.
Posted by Robert Enders at 3:21 PM No comments:

I haven't posted in a couple days because I'm busy working on Mike's campaign for school board. I'm going door to door in housing additions in the NACS district distributing door hangers with his family portrait and platform on them. I also have a bunch of campaign buttons, but since I don't see very many people when I go out on my route, I haven't handed any out yet.

(If anyone wants a button, let me or Mike know. They might be a collector's item someday. You probably won't put your kid through college by selling one on eBay. But maybe you'll be able to afford to by all the pencils that he'll ever need. That is, if they still allow sharp objects on campus 10 years from now....)

I've been handing out a couple hundred a day. I didn't go out today because my legs and shoulders are sore. This is the unglamourous grunt work of politics but this is ultimately what gets people into office. Make all the proposals you want, formulate some possible policies, or go post anonymous flame comments on other people's blogs. Eventually, someone has to leave the house and make sure that actual voters outside of the candidate's immediate family are aware of the issues. That's what I'm doing now. Hopefully I can finish giving out the rest of the hangers by the end of next week.
Posted by Robert Enders at 6:31 PM 2 comments:

Sylvia Smith and the Draft

In Sunday's Journal Gazette, Sylvia Smith advocated the reinstatement of the draft. She insists that all young Americans should serve two years either in the military, the Peace Corps, or some other national service program. She does not cite any particular emergency for making a draft necessary. She simply writes "But think of the benefits, starting with establishing a national norm the expectation that Americans give something to their country."

She hope that mandatory national service will instill the value of voluntarism in young people. But I happen to know a little about young people because I am a young person. When something is mandatory, it is no longer "cool". Most young people only stay in school until they are no longer required to go. Try to fight obesity by making them take phys ed; as soon as they enter college they cease exercising and gain 15 pounds their freshman year.

True, many young people will cheerfully do as is asked of them and pick up a rifle or broom and do their patriotic duty. These people would do it whether they were required to or not. The rest of them will drag their feet and do the sloppiest job possible while picking up trash along the highway. Once their two years are up, they will never do any form of volunteer work again.

I propose that instead of making it mandatory, we should try the carrot approach. Offer college and high school credit in exchange for volunteer work. Hopefully they will take a liking to volunteer work and continue doing it for the rest of their lives. Because if young people are forced to "volunteer" they will lose all desire to labor on behalf of the community once they are no longer forced to work.
Posted by Robert Enders at 9:27 AM No comments:

A look back at history