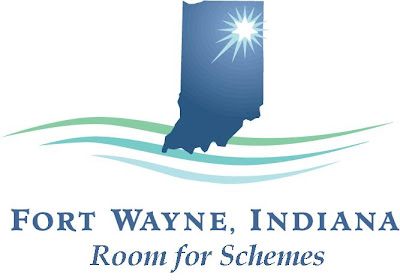 Gloria and I started a new blog, "Room for Schemes"
Posted by Robert Enders at 8:29 PM 5 comments:

In the past, whenever someone was killed south of downtown, the local newspapers tended to use the phrase "south side" either in the headline or the opening paragraph. But the phrase "north side" was not usually used when people were shot north of Main Street. While it is true that more homicides take place on the south side of Fort Wayne than on the north side, the perceived hazards outweigh the actual risk, which is a very small risk. People's perception of the south side of Fort Wayne is greatly affected by media coverage. When readers see "south side" in a news article about a killing, they often mentally associate the whole area with a single tragedy. We all agree that it would be irrational for a person to be afraid to drive out to Pine Valley just because someone was murdered at IPFW. It's equally irrational to be afraid to drive to Waynedale just because somebody was killed on South Anthony.

Here's some examples of what I am talking about. Three homicides have taken place so far this year, and all of them appear to be justified. The Journal Gazette noted that the first shooting took place "in a quiet near-northeast-side neighborhood". This is as if they were trying to reassure the good folks of DuPont Rd that they were never in any danger.
For the second killing, the headline says that it took place on Coliseum Blvd, a road that stretches from north to south. You either have to recognize the Centennial Wireless and Payless stores shown in the accompanying photograph or read the whole article to know that it happened on the north side of town.
The headline for the third killing reads "Fatal shooting on south side". Considering that many people just skim the headlines, these people would be more likely to be aware of the location of the most recent killing than the location of the previous two. Consistency in the way crime is reported is needed to be fair to the honest people who live on both the north and south sides of Fort Wayne.
Posted by Robert Enders at 11:30 AM No comments:

One way to win the War on Terror

In the past, the US has won wars in part by attacking the enemy's infrastructure. However, al Qaeda and the Taliban do not have much in the way of buildings and roads. But they do get a lot of funding through the production and sale of illegal drugs. If people were able to obtain drugs legally, depriving the terrorists' of their monopoly/cash cow.

Is this country willing to legalize drugs to win the War on Terror? Think of all the drastic measures this nation took in prior conflicts: the draft, the Manhattan Project, food rationing. During World War II, Ford and GM stopped making new cars in order to save vital resources. Can you imagine Congress or the President asking these two companies to cease production today? The legalization of drugs would be a far lesser strain on our way of life than any of these.
Posted by Robert Enders at 3:07 PM 1 comment:

A Fort Wayne police officer fatally shot a man in the head yesterday. With the information available from this article, the shooting was probably justified. If that is the case, then I heartily commend the actions of the FWPD. This probably was a case of "suicide by cop", since the deceased called the police and made threats, then pointed a weapon at the officers. I wish that this fellow had sought counseling rather than putting the police in this situation.

A couple thoughts:
1. I would like to point out that this incident did not take place on the south side of Fort Wayne. In the past, TV stations, radio stations, and newspapers included the phrase "South Side" in the headline when a killing took place on the south side of town, but never used the phrase "North Side" in the when a killing took place on the north side of town.
2. In this case, the dead man's actions were what led to his demise. Many homicide victims do place themselves in dangerous yet avoidable situations. Your own actions play a larger role in your risk of being murdered than your place of residence.
3. No matter where you live in Fort Wayne, you are more likely to die in a traffic accident than be murdered. I personally feel safer walking down Oxford at night than I do driving on Coldwater Road during rush hour.
Posted by Robert Enders at 12:48 PM 1 comment:

A small bit of advice to both Obama supporters and opponents

Blagojevich is accused of demanding payment in exchange for appointing a US Senator. But politicians trade favors all the time. You vote my way on a bill, I’ll vote your way on a different bill. If you vote against my lucrative contract, I’ll stop giving to your campaign committee. How would you like a job as a “consultant”? A savvy politician always makes sure little is said aloud and nothing is in writing so that there’s a reasonable doubt and criminal charges won’t stick.

To be sure, there’s plenty of corruption in the private sector as well. Human nature being what it is, we cannot rid the country of corruption. While it is essential to give government a certain amount of power to control private sector corruption, too much power increases the risk and possible damages by corrupt officials.

Obama’s supporters must be careful what they ask of this man and what powers they wish to endow upon him. Even if he turns out to be the greatest president who ever was or will be, he will only be in office for a maximum of 8 years. Whoever succeeds Obama as POTUS will retain the powers and privileges that were assigned to Obama during his administration.
Posted by Robert Enders at 2:43 PM No comments:

I don't usually buy into New Year's resolutions. Any time of the year is the right time to start or avoid self improvement. But this year I'm going to try to donate 24 units of blood platelets by pheresis this year, the maximum a person is legally allowed to donate during a calender year. So in this case, the best time to start is in January.