My take on the John Mark Karr case.

This post may not seem timely, but I wanted to make sure I had all the facts first. If false confessions aren't illegal, they should be. Karr has wasted time and taxpayer money. He has created undue emotional stress for both the Benet family and his own family. One might wonder how to go about punishing someone who was prepared to go to prison and possibly death row. I think we should try sending him to prison anyway, and see how he likes it. He doesn't strike me as a fellow who would get along well with the other inmates...
Posted by Robert Enders at 12:35 AM No comments:

I realize it may seem frivolous to talk about Star Trek in a post like this, but I want to remember the anniversary of something good for a change. Indeed, it may seem distressing to be constantly hearing of disasters and wars in the news while rarely hearing of any good news. If you truly want to hear some good news, check out the birth and wedding announcements. Good events are rarely as dramatic as bad events; creation takes more time, patience, and effort than destruction. But if you look hard enough, you'll find something to be happy about...
Posted by Robert Enders at 4:11 PM No comments:

I am in today's Journal Gazette

On page 13 of today's Journal Gazette Weekender section, there is a picture of my date and me attending last Sunday's performance of Monty Python's Flying Circus.

Neither the photo nor the article have anything to do with politics. It is just me watching a play. However, almost any publicity is good publicity. I say almost because it has been drilled into me not to do anything like misspell "potato" in public.
Posted by Robert Enders at 12:24 PM 8 comments:

We have cleaned out our attics and garages and we are selling all the junk that we don't need anymore.(and possibly didn't need in the first place)

The Fundraiser will take place at pavilion #2 at Foster Park. It will run from 8am to 8 pm. If you have ever dreamed of owning a foosball table once used by a third party candidate for state representative, Labor Day will be your chance to snag one. I will be there handing out campaign literature from about 1 pm to 8 pm.

Come on down even if you aren't a Libertarian. We won't tell Knuth or Shine that you were there.
Posted by Robert Enders at 9:24 AM No comments:

I've been accepted into Mensa.

Mensa is a group for intelligent people. In order to join, one must pass an admissions test. I had wanted to join for some time now and I've just recently got around to it.

I want to make it clear that I do not expect people to vote for me just because I have an above average IQ. I'm just making it clear in advance that in case I say something Dan Quayle-like in public, I am not as stupid as I might have sounded.
Posted by Robert Enders at 5:59 PM 6 comments:

GOP Energy Plan Is a Waste of Money AND Energy

Indiana State House Speaker Brian Bosma announced a $50 million plan to promote the use of corn-derived ethanol and other alternative energy sources.

But ethanol made from corn and other grains has already been established to be more trouble than its worth. Very few people are buying the E85 fuel because even though it costs the same as regular gasoline, vehicles do not get as many miles per gallon. So it cost more per mile to use E85, a bad deal for consumers.

Growing and processing the corn uses petroleum-based fertilizers and fossil-fueled powered tractors. Converting the grain into ethanol takes up even more energy. Last year, a study was conducted by a Cornell University ecologist. The study shows that producing ethanol from corn takes 29% more energy than is produced when the ethanol is finally used. Think of it this way: It is more or less like burning 5 gallons of gas to create 4 gallons. It just isn't a very efficient way of doing things.

Its a national problem, not just a state problem: Fuel consumption in Los Angeles has just as much an impact on gas prices as local fuel consumption. One possible solution is already being tried in Brazil. There, ethanol is being produced using sugar, and it is proving to be a lot more efficient than corn. There is of course more energy in sugar than there is in corn, as anyone who has been around children can attest to.

So why aren't we doing the same thing? Because import tariffs on sugar keep the price of sugar artificially high, making it cheaper to continue to pay $3 a gallon for gas. As long as these import tariffs are in place, this country is prevented from trying a potential new energy source.
Posted by Robert Enders at 2:16 PM 4 comments: 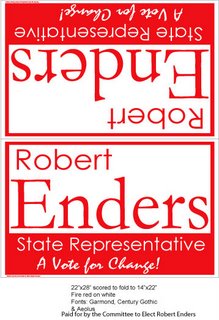 Today I start breaking up the scenery and changing people's minds. I'm going to start by giving them out to supporters who live in my district and moving along from there. I'm not going to sit around and wait until after Labor Day, because if I am going to win I have to work harder than my two opponents who enjoy more name recognition.
Posted by Robert Enders at 4:57 PM 2 comments: