One of the most common arguments for building a wall to stop illegal immigration is that the immigration was illegal. These folks were quick to stress that they were not racist, and that they just wanted these immigrants to obey the law and come here legally. Even if these immigrants have jobs and are paying taxes, the pro-wall crowd wants them deported for breaking the law.

Joe Arpaio should be subject to the same justice as anyone else. Instead Donald Trump pardoned him.
Posted by Robert Enders at 6:25 AM 7 comments:

Why the Google Manifesto writer was fired

I read the Google manifesto.

This is why Google decided to fire him.

Google has been sued for gender pay discrepancy. Millions of dollars are at stake. So Google is doing their very best to show that they treat their female employees fairly. Google also has to consider their public image, since more than half of Google′s potential user base consists of women.
One Google employee wrote a piece implying that these new practices were the wrong thing to do, and that there were difference between men and women that make income inequality inevitable. This was posted as an memo on an internal Google network, ostensibly where only Google employees would be likely to read it.
Criticizing company policy where your coworkers can see it is often a fast-track to getting fired. This includes statements made on social media, statements made to journalists, and postings on company bulletin boards. This goes double for criticizing policy in front of clients and customers.

James Damore′s termination was not about ideology, it was about the bottom line. Although it is legal to fire a person for political beliefs, most employers are happy to hire Democrats, Republicans, independents, and people who don′t vote at all. Google weighed millions in possible lawsuits and bad PR against Damore′s contributions to the company. They decided that they were in no longer need of his services. If keeping a employee is going to cost a company millions more than what they pay him, they will likely find a reason to fire him.


Damore is a smart man. He knows how computers work. He would like us to believe that he is an expert on human biology and psychology. He probably knew how US corporations work. He had to have known that publishing this manifesto would get him both fired and famous. That was probably his plan all along.
Posted by Robert Enders at 6:29 PM 2 comments: 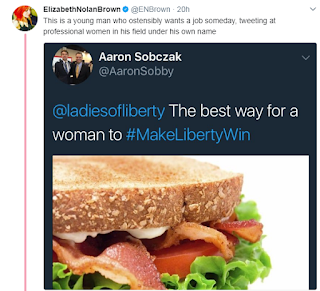 And Elizabeth Nolan Brown screenshotted it and sent a tweet of her own. As of this writing, Sobczak has made his account private.

Is it okay to make sandwich jokes? If I were the Dictator of Comedy, I would proclaim a 5 year moratorium on ″Make Me A Sandwich″ because it has run its course and is no longer funny. I don′t find them offensive, I just keep hearing them over and over and over again. And yet when I say that this is not funny, that leads people to the conclusion that it is funny. Just as when a man says that he is not racist, people will cite that statement as proof that he is in fact racist. But yes, Sobczak has a right to make idiotic sandwich jokes.

Does E. N. Brown have a right to call Sobczak out on this? Sure. This a teachable moment. When you make offensive or annoying jokes, expect people to respond by saying they are offended or annoyed. When you say something on the Internet, be ready for your own words to be heard by a wider audience than you originally intended.

When you introduce yourself to a fellow libertarian, it′s often in your best interests to show some common courtesy. Don′t say racist or sexist jokes until you′re familiar enough with that person to know what kind of humor they would appreciate. Elizabeth N. Brown was correct to teach Sobczak some manners.

This isn′t to say that there is no place for humor or other hi-jinks. Humor can help the cause of liberty greatly, but there is a time and a place for it.You can totally dance on stage in your underwear if you actually work in a strip club. It′s just not a good idea to do so at a political convention.

There has been some concern that Brown′s response may have damaged Sobczak′s career prospects. First of all, his sandwich joke did more to harm his reputation than her retweet of it. Secondly, if he is in the habit of making sandwich jokes in public, then his chances of being allowed to work around women are low. Third, I personally know a guy who said far worse, received undisired media coverage for it, and still landed a pretty sweet government job. Forth, nobody has a right to a good job. If a human resource director gets to choose from two equally qualified candidates and a Google search of both their names turns up a sandwich meme, I would bet money that her hiring decision would be based on her opinion of that meme. But there will always be demand for food service workers, janitors, and security guards.

If Aaron Sobczak has learned his lesson, then I wish him the best of luck in his future endeavors. If he has not learned his lesson, he′ll need a lot more luck than I could ever wish him. Perhaps he has a career in comedy in his future, but he′ll need fresher material than jokes about sandwich making.
Posted by Robert Enders at 6:26 PM 8 comments: