Another Wolfenstein game is coming. Apparently, some Nazis were upset by it..

Nazis in this day and age understand that they have an image problem. They are as popular as sex offenders and terrorists. They make for great villains in fiction because there was a time when they were better equipped and organized than they are now.

Of all the things Nazi could care or complain about, like the way they are portrayed in countless movies, novels, TV shows, comic books, they are complaining about a video game that has not been released yet. They have to know that this generates publicity and buzz about this big budget commercial product, right?

Look at this tweet and the response by @JacksonCrw/ 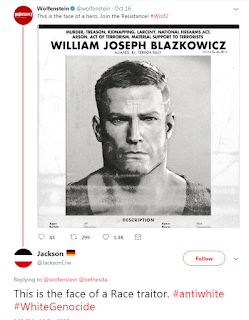 That Twitter account was created two months ago. It's feed is mostly lazy retweets. I strongly suspect that both of these accounts were created for the purpose of marketing the same video game. These LARPtroopers are as real and authentic as the Mecha-Hitler final boss.