Republicans have suddenly made education a higher priority issue this year. Trump thinks distance learning is terrible. Even though he spent his K-12 years in brick and mortar schools, he failed to learn proper punctuation and capitalization. 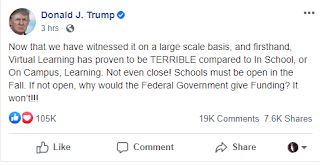 Technology is way better now than when I was in school. We would be foolish to not take advantage of that during this crisis. Imagine if 100 years ago, parents argued that school buses were not as effective at transporting kids to school as tried-and-true horse drawn carriages. Today we have something even faster and safer than school buses: wifi. Why should schools and parents place children at an unnecessary risk during a pandemic?

Even after COVID-19, distance learning has unprecedented advantages. Kids with rare, special needs can be matched with qualified educators anywhere in the country. Kids with behavior problems who need to be kept physically separate from other students can still continue their education. School districts with teacher shortages can outsource from areas with teacher surpluses. This can make it easier for schools to find teachers and easier for teachers to find jobs.

Distance learning isn't even all that new. For almost two decades, soldiers have been earning college degrees while deployed abroad in Iraq and Afghanistan. When the President dismisses distance learning as worthless, he is saying that these degrees that these brave men and women have earned are worthless.

This is the most important election of our lives. You all hear that every 4 years. This year is different. In the past, people would threaten to leave the country if the wrong man was elected president. There is always that failsafe in the back of your mind: "Canada isn't such a bad place, maybe I could move there," you might think. But because of the pandemic, every other country has blocked all travel from the US. Nobody can leave now. This will likely be the case until there is a vaccine or COVID-19 just burns through all available victims. For better or for worse, we are stuck with each other. Since there is no where to run anymore, we need to find a way to end the escalating cycle of violence and chaos that is happening right now. We're approaching a point where not even isolated gated communities are completely safe.
For this and many other reasons, I propose that we end the War on Drugs. By repealing the Controlled Substance Act, we can dramatically reduce the violence that goes on in our cities. Gangs fight over drugs because it's an illegal product. Change the law, and they won't have anything to fight over. Our homicide rate could be as low as Western Europe.
As it stands now, the US has the most prisoners in the world. China has three times as many people as the US but still has fewer prisoners overall. One in 4 prison inmates on Planet Earth is locked away in the US. And it is not a coincidence that 1 in 4 COVID-19 cases are recorded in the US. The virus spreads so easily from inmate to inmate that prisons are practically coronafarms.
Drug addiction is a disease that is worse than any sentence that a judge will hand down in a drug case. Most diseases we can be open about: people will talk about their weight loss goals, rare congenital conditions,etc. Drug addicts have difficulty coming out in the open about their problems because they are at risk of going to jail. So they end up shunning friends and family and seek the company of other drug addicts. And yet even while in jail, addicts often find ways to get a hold of what got them there in the first place.
As it stands now, society shows more compassion to the wealthy white woman who is addicted to opiods than the black teenager with a baggie of weed in his back pocket. While we have a long road to go when it comes to racism, we can reduce it's negative effects. Racist cops can easily plant evidence without being caught by their own body cameras: simply stand with the camera facing away from the suspect vehicle, pull a baggie out of one's side pocket, toss it on the floor of the vehicle, and pretend to find it for the first time where the body camera can see it. While I have full confidence that most police are honest, hard working public servants, highly publicized accounts of police corruption gives minorities reason to believe that there is way more corruption than politicians are willing to admit. By ending the Drug War, honest cops have a better chance to win the trust that they deserve.

I'm Robert Enders, the 2020 Libertarian candidate for US House of Representatives (IN-3). I don't drink alcohol, I don't smoke, and I don't use illegal drugs. My goal is to end the War on Drugs so that I don't have to hear gunshots in my neighborhood anymore.
Posted by Robert Enders at 4:14 PM 1 comment:

Congressman Jim Banks and the Reopen Our School Act

The Reopen Our Schools Act is a mind boggling travesty. During this crisis, parents and schools should have the right to decide whether or not to have kids back in the classroom without the federal government getting involved. For that matter school districts should forego federal funds if they have dangerous strings attached.

Congressman Jim Banks co-authored this bill. He claims that children are at low risk of contracting COVID-19. My guess is that the reason for this is because the kids have been staying home. Children have died from this illness. And while children might be at a lower risk of death, they can transmit the virus to their parents and others.

Dr Fauci has said that whether or not schools re-open might depend on the region. Since the Reopen Our Schools Act would apply to the entire country, this might encourage a lot of schools to reopen when the risk of infection is still high.

Folks, I’m running against Jim Banks in the 2020 election this November. You’ll hear a lot more about my campaign soon. #PleaseVoteResponsibly
Posted by Robert Enders at 2:57 AM No comments:

Please do not leave your homes for the purposes of protesting the quarantine. You can totally protest it from home.

The way I see it, the virus is either real or a hoax, and it is either dangerous or no worse than the flu. We all can argue until we're blue in the face about the unknown unknowns.

If the virus is real and as dangerous as advertised, staying home is the common sense thing to do. If something can hurt or kill you, and you can't kill it, then you avoid it. That is common sense. Even if you plan on wearing masks and social distancing at your event, there is the risk that someone will be involved in an accident and require treatment at the ER. This puts that person at risk of catching a disease at the hospital. Officials will be highly tempted to blame any increase in deaths on the protest. If the Deep State is as evil as you think they are, then they WANT you to protest the quarantine. They want the liberty movement to look like dangerous idiots. They want an excuse to arrest you or even shoot you in front of dozens of cameras, and make you look like a terrorist when they do it.
State governments will have to reopen the economy soon anyway. This is what most of you want anyway, so sit tight. If state governments don't reopen the economy, they'll run out of tax revenue, go bankrupt, and we'll see a massive society collapse. That is what some of you want anyway, so sit tight.
Once again, if the virus threat is real, then the right thing to do is to stay home, in spite of what the government has ordered. If the virus threat turns out to be exaggerated, that could be an interesting discovery during an election year. In either case, please stay home, stay safe, and stay woke. Stock up on canned goods in case the grid goes down, learn to code in case the grid stays up.

Posted by Robert Enders at 1:08 AM No comments:

A Long Way From Tipperary is on sale for the duration.

By now, you will have exhausted everything worth watching on Netflix. So my novel will be on sale for the duration. The ebook is 99 cents and the print version is $7.92. This is as cheap as Jeff Bezos will let me make it. Pretty much any device that you are reading this on can be used as a Kindle.
I would say that now is the time to switch to e-books. You're not going to the library any time soon. It's not like you've been to one recently either, you functionally illiterate savages, but let's focus on self-improvement. An e-book can be available to you within minutes, and is still available off line after you downloaded it. The only upside of a print book is that you can still read it after the grid goes down, but you'll probably have bigger things to worry about when that happens.
Maybe I should be thinking more positive. Anyway, buy my book about space warlords who want to murder everybody.
Posted by Robert Enders at 7:00 PM No comments:

We support President Trump's nomination of Jussie Smollett to the Supreme Court. The fact that the Cook County prosecutor is not filing charges against Smollett PROVES that he is INNOCENT. Both Trump and Smollett have been the victims of FAKE NEWS! If we have learned anything from the Kavanaugh hearings, it is that. a man is innocent until proven guilty. Unless you are 100% certain that a man committed a crime, then you cannot say anything to imply that he is guilty or you can go to prison for SLANDER and TREASON!!! If we are only 99% percent sure that Smollett is guilty, then the Senate must vote as soon as possible to confirm his nomination.

Posted by Robert Enders at 12:28 AM No comments:

The Sentinelese people are at risk.

On the one hand, most people agree that the Sentinelese people have a right to be left alone. On the other hand, they just aren't going to be left alone forever. One foolish man tried to convert them to Christianity this month. Fools are like roaches, there are many, many more besides the one you just stomped on. If the Sentinelese don't die out from a disease brought by this most recent intruder, they are still at even more risk than ever before.

Some might try to convert them again, someone might try to recruit them for a cult, someone might want workers for a new sneaker factory. Their best hope for survival is a well-planned intervention. The first step to helping them is gaining their trust and consent. The first step to gaining their trust is to establish contact. The safest way to establish contact is to send an arrow-proof robot with a video screen to the island. And even if the natives don't destroy the robot or ignore it, it will still take years before linguists learn enough of their language before their can be any mutual understanding.

If the Indian government isn't willing to allow this, these people may die out within a few years.

Posted by Robert Enders at 3:57 AM No comments: